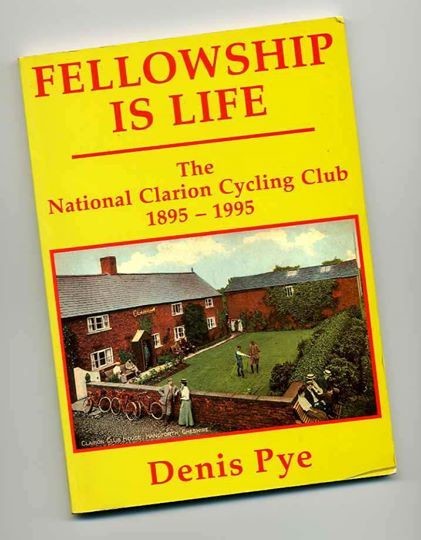 Denis Pye retired early from teaching in schools and colleges. He was a member of the Clarion Cycling Club’s National Committee for more than twenty years.

Note to the 2014 Edition By Chris Goode (Yorkshire Coast Clarion)

Denis Pye has produced a detailed and fascinating account of our club’s history which stems from the first printing of The Clarion newspaper, in December 1891. He documents the rise of the Clarion movement before the First World War, the contribution of those promoting socialism, assesses Blatchford’s and Tom Groom’s roles and is comprehensive in examining the many facets of the Clarion movement.

Some things do not change and almost from the first meet there has been an enduring debate about the political nature of the National Clarion Cycling Club. This can be seen throughout the book and continues into this century. One of my earliest memories of an Easter Conference was Harold Lamb, in Llandudno, emphasizing the unique nature of our constitution and defending the rule for the propagation of socialism.

The epitome of the Clarion spirit, for me, was seen at Stamford when Martin Perfect was awarded ‘Clubman’ of the year. Martin is an ever-present, travelling from Kent to compete in time-trials in Yorkshire and the North of England. For the Easter Meet in 2013 he single-handedly won the mileage trophy for London Clarion, at Scarborough, and narrowly missed out in 2011 when he rode 600 miles to get to the Easter Meet in Stirling. North Cheshire Clarion won the trophy on this occasion.

The last decade, since the second edition, has seen a few changes for the National Clarion Cycling Club. In 2008 there were 589 members, with 24 sections and only 17 juniors. We now have 30 sections and around 1500 members, with about 200 juniors. Part of this is down to the hard work of West Lothian, Fenland and North Cheshire Clarion who have Go-ride activities. Other new sections include Saddleworth, Italian Clarion, Cambridge, Blackpool, Barnoldswick, Malmesbury, Sheffield, Coatbridge, Tuxford, Yorkshire Coast Clarion and Gosport. Thanks are also due to the National Secretary, Ian Clarke, the National Membership Secretary, Donald Lever, and other members of the National Committee for their dedication.

The club is very fortunate in having a superb magazine, Boots and Spurs. It was ably edited by Richard Newcombe, since the second edition of Fellowship is Life was printed in 2004. Giles Perkins (North Cheshire Clarion) took over, in 2010, for a couple of years and the current editors are Matthew and Kirsty Ball. Recently Boots and Spurs got magazine cover of the decade, in Scotland. This will not come as a surprise because Garry Marshall’s design work is of the highest quality.

Denis Pye has amended the list of Easter Meets, National Secretaries and made some minor adjustments to the text and photographs; for example deleting the photograph of the Menston club house which has been sold and adding the name of the third and fourth Clarion cyclists, Tom Dolan and Tom Oldershaw, to die in the Spanish Civil War.

The changing political scene, between the wars, is highlighted in chapter 12. In total 586 British volunteers died fighting against the Fascists in Spain and Denis evokes the attempts made to avoid war through sport and the moral position of the Clarion movement. In 1938 two Clarion cyclists, Ted Ward and Geoff Jackson, rode from Glasgow to Barcelona to raise funds for the Basque children who were fleeing from Franco’s fascist Spain. Our club has much to be proud of and seventy years on a group of Clarion cyclists re-enacted this ride, making friends with Gernika CC and others along the way.

Since 2009, we have met in Ramsbottom, Eastbourne, Stirling, Buxton and Scarborough. This year’s Easter Meet in Beverley will be the 119th gathering. The Clarion spirit lives on, in different forms. Essentially we continue to ride our bikes, sing, and enjoy good fellowship throughout the United Kingdom and beyond. One of the highlights for me in the last ten years has been Mikron’s play about the Clarion, Pedal Power, written and composed by Richard Povall and Rebekah Hughes. It was first performed at the Working Class Movement Library (WCML), in Salford, and subsequently at Wortley Hall and The Met, Bury, amongst many other venues.
The Clarion archive, at the WCML has grown substantially since Denis’s book was first published, with the most notable additions being the bequest of Bolton Clarion Scrapbooks which were started in 1896, the five newsletters of the Southern Counties Union from the 1930s (donated by Norman Luxford), the very recent presentation by London Clarion of the 1892 Summer Special, with signatures of four main editors and an original art work by Montague Blatchford. If any member has material that they wish to donate, the library is the best place for it.nother important event came two years ago with the celebration of the centenary of The Clarion House at Roughlee, in Lancashire. There was some great singing by the Clarion choir and not a tea bag in sight. It is open every Sunday and some bank holidays.

We need more people cycling, especially with 34 million vehicles on the roads in the UK. The National Clarion Cycling Clubs have a great future, a history to be proud of and a superb spirit. Keep those wheels turning and, if it is raining, put your feet up and turn the pages of Denis’s excellent book.

Save this product for later